Today in Transition: From Winfield, KS to Lincoln, NE

Posted on July 13, 2014 by ashleealleycrawford 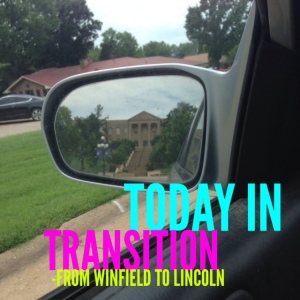 It seems that the only thing unchanging is that things change.  After living in Winfield, KS, USA for 15 of the last 20 years, it seemed that actually, nothing changed.  I moved there 20 years ago this fall to attend Southwestern College.  My time at Southwestern has been marked by being challenged spiritually and intellectually, receiving life-long friendships, and ultimately, was the context for my call to ministry.  None of those things have changed in these last two decades.

And yet, things do change.

I found out at the end of March that I would be moving to Lincoln, Nebraska to take a position with the United Methodist Church in the Great Plains Annual Conference (which includes Kansas and Nebraska).  This would mean that I would be leaving 9 years of ministry at my beloved Southwestern College.  When I consider the 3 most essential forces that have shaped who I am, it is my belief that Jesus really is who he said he was, my family, and Southwestern College and her people.

Saying yes to this new position with the conference meant saying “see ya later” to my spiritual home, my relational network, and meaningful work.  Oh, I know that I’m being dramatic—my spiritual home can’t be bound to a physical address, my friends and family who love me and take care of me still love me, and I have more meaningful work ahead of me.  But give me a minute here, I’m grieving the loss of the relationships that I’ve had with a place and a people for more than half of my life.  (Boohoo, sob, sob.  Okay, I’m better now.)

Before I can talk about what saying goodbye mean, let me talk about what saying hello means.  Saying hello to my new position with the Great Plains Annual Conference means moving to a state where I had only been twice (a third time, but that wasn’t on purpose—just driving through).  It means serving Christ by working in the Great Plains Annual Conference to help recruit and develop new clergy.  It means working with a program that is helping young clergy transition into ministry well with an eye toward a life-long fruitful ministry.  It means moving to the really amazing town of Lincoln, Nebraska (says the woman who has only scratched the surface of the city and has yet to experience it in winter…but people survive here, so I’m sure I’ll be okay).  And it means being open to the work that God wants to do in my life in a really profound way.

If this is what I am saying yes to with this move and this new ministry, why would a person even hesitate a minute?

Well, you may have your reasons, but my reasons were that it’s a little scary setting out in a new city by oneself.  I’m an extreme extrovert and yet, it’s often difficult for me to go somewhere by myself if I don’t know how I fit into the context.  Besides being scary, moving is also hard work.  Some of the work is physical, like packing (endless boxes of what I’ve come to identify as mostly unimportant) but much of the work is emotional (endless decisions about which house to buy, where to put that lamp, and whether or not I should renovate the kitchen, which feels important, but probably isn’t in the long run).  And yet, taking into consideration the scary and hard parts of moving, it was surprisingly easy to say yes to this move.

It caught me by surprise that I could go so easily because it would mean that I would have to leave.  Duh, you say.  But I’m a pretty determined (read: stubborn) person and so I can usually figure out ways to make things work, even if the odds are against it.  So, perhaps, I was trying to figure out a way to go and yet not really leave.   My friends (bless ‘em) helped me get in on this plan.  They also helped me in incredible ways to celebrate despite their sadness over me leaving (thanks for that, friends).  But, they preciously devised ways of talking about me commuting to work in Lincoln and prayed with me “thanking God for the opportunity to be used in ministry…and whatever.”  The prayers reminded me and my community that when we say yes to following Christ, we say yes to going, to staying, to blooming where we are planted, to sacrifice, to abundance.

Something that has come up several times for me in the moving process is John Wesley’s Covenant prayer.  It’s a powerful prayer of submitting one’s life to Christ, to experiencing the fullness of life in Christ, and of walking with confidence into an unknown future.  I first encountered this prayer just prior to seminary and I’ve encountered it again since then at several important junctures.  The words of it have resonated in my head and heart nearly every day for the last two months.

I am no longer my own, but yours.

Put me to what you will, rank me with whom you will;

put me to doing, put me to suffering;

let me be employed for you, or laid aside for you,

exalted for you, or brought low for you;

let me be full,

let me be empty,

let me have all things,

let me have nothing:

I freely and wholeheartedly yield all things

to your pleasure and disposal.

And now, glorious and blessed God,

you are mine and I am yours. So be it.

And the covenant now made on earth, let it be ratified in heaven.

So, I’ve covenanted with God that I’ll go, or I’ll stay, wherever I’m called.  Whereas it meant Winfield, KS for 15 of the last 20 years (with a wonderful Wilmore, KY interlude of 5 years), it now means Lincoln, NE.  It is a goodbye of sorts to the really incredible life I had in the amazing little town of Winfield, KS, with an spectacular church, generous friends, awesome students, etc. (Exaggerate much? Actually, no.)  But somehow it doesn’t feel like goodbye.  My new reality has yet to sink in, but God’s gracious hands have moved me along to this new address.  I’ve found some familiar things that remind me of “home” and found some exciting new things that stir my heart.  I’m unpacked, getting settled, and preparing my heart for starting work this week.  My work is forever going to be shaped by my time in Winfield, in Wilmore, and now in Lincoln.

Despite all of the evidence to the contrary on my blog, I process things best with words.  I often don’t know what I think until I write it or say it.  I’ve had some opportunities to process this transition with words with others, but for some reason haven’t been able to write much about it.  I did, however, take pictures as I was experiencing the “Last times…” in the finals months.  Again, at the risk of being dramatic, I have found that when words failed, the picture captured something for me that I just couldn’t articulate.  So, until I have more words, I’ll just savor the images that God has emblazoned on my heart and look at the pictures one more time.

Transitions are not easy.  But they are a part of God’s enduring call on our lives.  We are in good company when we set out and leave home (or go home) as a part of God’s call.  I think of Abraham (excuse me, Abram), Joseph and Joshua whose lives were uprooted by a call to find a new home, one that was often fraught with difficulty, but also great blessing.  I also think of Ruth and Naomi, Samuel, and Jeremiah who had to be brave and say and do things that required courage in order to be obedient to God.  I think of Esther and Deborah who were in positions of power and who God used to further God’s purposes.  And of course, Peter, Paul, and Mary (the people of the New Testament, not the musicians—I’m not that old) were bold, faithful, and called to do difficult things.  I see bits of my own transition as I contemplate their transitions.  But the thing about transition is that it is always change.

So for today in transition, I’m looking at pictures on my phone and in my heart that show me that I can trust God for the future by celebrating his presence in the past.  And that is more than enough.

I am the Clergy Recruitment and Development Coordinator for the Great Plains United Methodist Church. I particularly enjoy helping people see what God is calling them to do and knowing how to respond to that. I'm an ordained deacon in the UMC. When I'm not deacon-ing, I run, or read, or spend time with family or friends.
View all posts by ashleealleycrawford →
This entry was posted in Uncategorized. Bookmark the permalink.