Some Changes at SC

Posted on May 26, 2009 by ashleealleycrawford 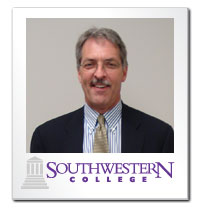 Well, it has often been said that change is inevitable, and we find that to be true at Southwestern College. After 14 wonderful years as the Campus Minister and Chair of the Philosophy and Religion department, Steve Rankin has felt the call of God to minister in another community. As of July 1, he has accepted an invitation to become the Chaplain at Southern Methodist University in Dallas. We are certainly sad to see him leave Southwestern, as his ministry is keenly felt on campus at this time. I was a sophomore the year that Steve started at SC, which means that during my freshmen year we were absent a Campus Minister. The impact that he made, even in the next 3 years, was significant. He redesigned chapel involving student worship teams. He started Discipleship Southwestern, a program that has now involved over 150 students (and of which I am currently the director). He nurtured the call to ministry in a number of students (including myself). And he poured his life into his students. In the 11 years since, he has continued on that initial impact in incredible ways. I have been honored to join him in the work at SC during the last four years. Keeping up with him is at times dizzying, but always significant. I cannot begin to express the impact that Steve has made on my own life and on the lives of many other students in the last 14 years.

Steve will be significantly missed on campus, but, as has been his goal, he is about the work of the Kingdom of God. He has simply chosen to be obedient to that goal through another arm of the United Methodist Church. While I’m sad for us at SC, I’m very excited for him and for SMU! I believe that he will make an impact for Christ in that community as well! Here is his take on the move. Please join me in praying for Steve and his family as they all adjust to life outside of Winfield.

I am the Clergy Recruitment and Development Coordinator for the Great Plains United Methodist Church. I particularly enjoy helping people see what God is calling them to do and knowing how to respond to that. I'm an ordained deacon in the UMC. When I'm not deacon-ing, I run, or read, or spend time with family or friends.
View all posts by ashleealleycrawford →
This entry was posted in Campus Ministry, Chapel, Discipleship, SMU, Southwestern College, Steve Rankin. Bookmark the permalink.

3 Responses to Some Changes at SC